Bat Shaving is a service that will add 30-60ft to the distance of a batted ball. The inside material of the bat's walls are shaved away making the wall thinner. A thinner wall will create more flex and launch a softball or baseball much farther. It also increases the sweet spot by 40%. By altering the bat in this manner it renders the associations stamp's void because the bat surpass the batted ball mph standards limit. A shaved bat is great as a confidence builder or Homerun derby bat. 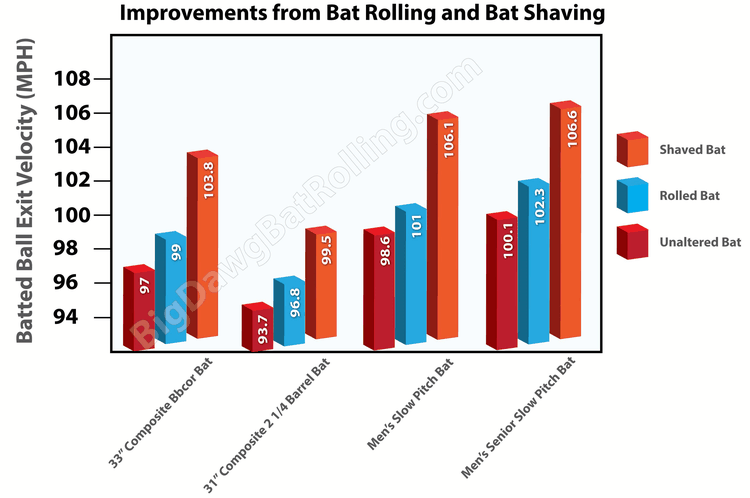 Shaving bats has been around since 2001 when a softball player named "J.R. Hayseed", from North Carolina, removed material from the inner barrel of a Miken Velocit-E Ultra. The Ultra was already a hot bat but shaving a bat on a lathe made a difference no one had ever witnessed. Word spread and within 2 seasons local softball bat shaving doctors were in business. Shaved softball bats were now headed towards mainstream men's softball.

How Long does Bat Shaving Take?

What Kinds of Bats do you Shave?

Email us and we will give you an answer to that question because some bats just cannot be shaved and we do not want you to send in a bat we cannot modify. Other bat shaving companies will say they can shave all types of bats but in some cases you will get back an unshaved bat claiming to be shaved. We do not shave Aluminum or Alloy Bats nor should they be shaved.

Will my Bat(s) be Less Durable after Bat Shaving?

Bat shaving takes out material from the inner walls of the bat, so the answer is yes. It is hard to gauge exactly how much life is taken out of the bat but based on experience it is around 50% with a normal shave and that number goes up as the aggression of the shave goes up (assuming the bat is used in normal conditions).

**BigDawg recommends using a rolled or shaved bat in temperatures above 65 degrees; most manufactures recommend the same. The bat is not the problem it is the cold balls used. Elastic properties of baseballs and softballs change significantly with temperature and humidity changes.

These bats will not be legal for use in any organized association once rolled and/or shaved. Any association including but not limited to; ASA, USSSA, ISF, ISA, NSA, SSUSA, Dixie League baseball, Pony Baseball, Babe Ruth Baseball, Little League, AABC , Official Baseball, Bbcor, BESR etc., They should only be used as Homerun Derby bats and building confidence while hitting.

YES. The manufacturers warranty will no longer be valid after bats have been shaved. There is no bat manufacturer's that will warranty a shaved bat.
Priority Shipping Times
Shipping Costs
Ground/Priority $9-$20
2 Day Shipping $25-$50
Next Day Air $60-$120

Will the bat weigh Less After Shaving?

No, we reweight all bats we shave unless other wise specified by the customer. We normally put most of the weight back into the end load because it has been proven that an end load will increase bat speed.

What is the Polymer Coating for?

The coating transfuses into the fibers and seals the recently shaved bare layer of composite with a rubber-type coating. This polymer gives strength to the barrel to reduce the occurrence of composite degradation, which helps lessen composite rattles.

Is it OK to use my Shaved Bats in Cold Weather?

No, Cold weather and cold balls will destroy shaved composite bat. The balls become denser as the temperature drops. The balls will travel farther but the dense balls will also cause the bat to flex more and increases the chance of cracking exponentially.